Philosophy behind the Arketing Plan

“To be successful in the market place globally and to make your mark as a company, you obviously have to have the complete package and unique ingredients that attribute to success.”

Obviously, it goes without saying, you need a truly great product, if you’re going to be globally successful and a company that is still here in 20 or 30 years from now. To follow that, you have to have the right marketing plan that enables Distributors to retail a product at an affordable price and to build an organisation that is duplicatable to the many, enabling people to achieve their financial goals and dreams whilst being stable enough to stand the test of time.

Apart from timing and more importantly positioning and also the type of industry and profession that a company is part of, probably the other most important ingredient that you need is Philosophy, or in other words.... THE WHY BEHIND THE HOW!

So let’s look at the philosophy behind the Arketing Plan and why it is so unique in the industry.

Certainly, it’s true to say, no matter how good your Marketing Plan is, if a company launched tomorrow with a unique and revolutionary product or range of products as Arkworld certainly has, it wouldn't really matter what your plan looked like, they would be successful anyway.

In other words: A GREAT PRODUCT IS EVERYTHING!!

Before we get into how Arkworld’s 2 x 4 Breakaway Ark works in more detail, we have to give a quick mention to retailing, because retail is not only the greatest and most important area of income there is; it’s the key and foundation to your business.

In the (m)Arketing Plan, besides the obvious 20% - 40% Retail Profit for Distributors to earn, there are also many other incentives, rewards and recognition for Retailers. There are Retail Conference Calls and qualifications that only people who retail can attend, because often an event or promotion is based on personal volume (pv) points, so it’s important to not only recruit new distributors into your business but to build up a strong retail customer base too. 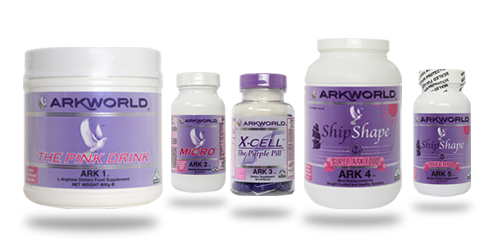 As Arkworld increases in size and expands around the world, the company will introduce a Retail Rewards Program and special recognition for distributors who consistently produce good personal sales volume. It is important to Arkworld to always recognise the top retailers in the company monthly and annually for their hard work and the planned Retail Rewards Program will go a long way to doing that. After all, with the most revolutionary and scientifically groundbreaking products on earth that has the ability to change people’s lives for the better and improve their health, weight and lifestyle significantly, who wouldn’t want to sell them.

A closer look at the 2 x 4 Breakaway Ark

In our example above, John has become a Distributor for Arkworld and in his first week he has personally sponsored 2 Active Distributors. Sally was sponsored first and then Fred one day later. However, John then goes out the next day and before Sally has a chance to sign up anyone into the company, John signs up a third person - Tim.

Tim is automatically placed underneath Sally, which John doesn't mind because John will earn from Tim and 3 more levels below him, (4 levels in all) down to the 5th level in Johns Ark. This would earn John an Ark Royalty Kommission from both Sally and Fred of 2, 4, 8 and 16% 4 levels deep, but also an Ark Matching Bonus (which is exactly like commission) of 2, 4, 8 and 16% 4 levels deep from Tim down to the 5th level in Johns group.

Sally and Fred would obviously start recruiting themselves and all 3 together would build their 2 x 4 Arks. John could also recruit more people underneath Sally and Fred helping them even further and those new people would still be counted as John’s first levels in terms of commissions and bonuses and even greater Ark Matching Bonuses would be earned by John. Sally and Fred can do exactly the same with their groups as everyone in Arkworld has the same equal opportunity.

Once John has filled the 4 levels up, he then Breaks Away, builds a new Ark and starts again.

It’s true that Sally was fortunate to get Tim in her business from above as John sponsored Tim and not Sally through her own efforts. However, John’s efforts have given Sally a quick start and a little bit of help and a good start is always a good thing. However, the one thing to remember about getting free business from above is that it’s down to luck and as we know you can’t rely on it; it’s much better to do things by design!

So Sally can't rely on John too much, she is going to have to build her own business and although Sally may have received some luck in getting Tim in her business, if she wants to succeed and not just make a few dollars or pounds, but wants to build a business that pays her a part time or full time residual income with financial freedom, Sally is going to have to learn the skills of success and with desire and a willingness to work, retail the product and recruit distributors herself.

REMEMBER - THOSE THAT WORK GET THE PAY!!

One of the best things about Arkworld’s 2 x 4 Breakaway Ark marketing plan is that John can only personally sponsor people down to 4 levels in his business, so once one Ark is full, he has to Breakaway and start another Ark, therefore, there is a limit to how much free business Sally or any of his distributors would get free. It’s designed to help everyone but also to be fair and encourage growth to help an average person earn an above average income.

Some companies over the last ten years or so have built Matrix Marketing Plans that only ever go one way and that’s deep. Distributors, then assume the whole company will be built underneath them and promised lots of free business. Not only do they join for the wrong reason but when they don't receive lots of free business, they get disillusioned, and then quit the business and eventually the company folds. A plan has to go wide as well as deep and Arkworld’s 2 x 4 Breakaway Ark eliminates, completely, any of these problems, because just like a Stair-step Break-away marketing Plan you need to talk to people, recruit new distributors and build a business yourself.

“There will never be a substitute for good honest hard work, by retailing a product and then recruiting Distributors yourself and teaching them the skills to retail and recruit as well.”

As Jim Rohn once said...
'Invest a little time, in a lot of people' Or ‘Say less to more people’

The greatest factor about a 2 x 4 Breakaway Ark is that it’s the best parts of every plan ever written and more and as it is not a Stair-Step Break-Away, a Binary, Uni-level or a Matrix Marketing Plan; it is completely unique…

These plans have a lot of good things going for them and have been the most successful marketing plan in the industry until now, but they have a high drop out rate and most people don't make money quick enough to stick around for the Gold Mine at the end of the rainbow. They attract big hitters, but the average person doesn’t stand much of a chance to become more than they are and earn the incomes that the up line Leader earns. So they drop out rate within the first 3 months is very high.

Binary’s are an offshoot of the Matrix Plan. They can lead to many regularity problems and you are encouraged to recruit not just people but business centres in a Matrix of people which is very misleading. You end up with 50,000 positions in the company and only about 3,000 to 4,000 actual people who keep buying 2, 3 or even more positions each. They are very disruptive and very misleading.

These Plans are just too limiting and like most bad plans only go one way and that’s deep. The problem here is that if you have a 3 x 3 Matrix for example with your first 2 levels full up and then you then personally sponsor someone else who then has to go on your 3rd level, you can't earn any deeper in your business, or from their group either because your limited to 3 levels deep all the time with no breakaways to create width and no option to go any deeper. Matrixes are very constrictive with your income. Some companies have modified Matrixes that go deeper but unfortunately with no width and as we have said before, people are promised lots of free business which they never get, so Distributors get frustrated and quit and most companies fold and don’t last very long.

Here at Arkworld with our 2 x 4 Breakaway Ark, we have a Marketing Plan that eliminates all of these problems and surpasses anything ever seen before or used within the industry.

You retail a product and the more you retail the more you earn in discounts and commissions. You then personally sponsor people into your business and teach them the basic skills to retail and recruit too. Every Distributor you personally sponsor, you earn 4 levels from regardless of where they fall in your 2 x 4 Ark and once you have reached 4 levels deep in your Ark, you Breakaway and build another one creating both width and depth with an achievable business for everyone regardless of background, experience, skills or talent.

So you sell and recruit, wide and deep and then learn the skills of promotion and duplication, with honesty and integrity through honest hard work and good discipline, work your way up ARKWORLD’S STAIRWAY TO SUCCESS and receive the greatest rewards, commissions, bonuses, training, support and recognition any company could possibly give.

Along with the finest quality products money can buy, strong leadership and an Ark Philosophy or Arkology that has its why and heart in the right place...